LISTEN: Idaho family closed purchase on a portion of Cougar Island with an in-perpetuity conservation easement

Listen to the interview or see the full transcript below. 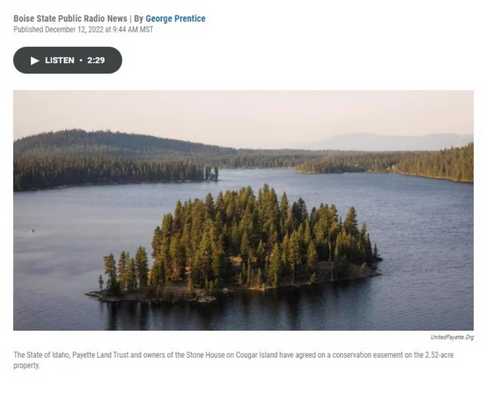 Conservationists say the future of Cougar Island on Payette Lake is a now bit more secure.

Just over 2.5 acres of Cougar Island near was auctioned off this past fall to a family which had been leasing a cabin for years on the then-state-owned land.  The selling price for the lot was more than $2 million; even the winning bidder indicated that the family would have to get creative in order to close on the property.

With very little time left before a deadline and with significant financial help from the Payette Land Trust, the now-owner of the land closed on the property on December 9, 2022. And with that closing, came a historic conservation easement.

“We know that we won’t see a glamping operation come in,” said Utter. “We won’t see this home become a lodge or a restaurant. It will remain as an individual home and keep that integrity of the island as it is right now.”

“So it’s a win from a conservation standpoint to pay out land trust. All the members of the United Pet Coalition and individuals from the community now have worked very diligently over the past year to try and conserve Cougar Island. There’s a win for an Idaho family, so the win for them is now they actually own the property that their home sits upon. And then the third win is truly a win for the state of Idaho, because this land that was sold was sold by the endowment, and the money that was raised from that sale goes back in to the endowment fund and goes on to the beneficiaries of the state of Idaho.”

With the closing, the property is now the only privately-owned lot on Cougar Island, with four remaining Cougar Island lots still held under the State of Idaho’s Endowment Trust.